skip to main | skip to sidebar

Shaw Kenawe If you even think of commenting here... save your time!

You are not wanted here and anything you post will be deleted.
This blog is Communist and Socialist Free!

I'm sorry but I'm mad. I blame every American voter who put the Dems in charge of everything. The White House, the House and the Senate--all in control of the Dems. Look what you have brought to us! Are you happy now, Independents? Are you happy now, "Moderate" Republicans that preferred to sit at home rather than vote for John McCain?

Just wait, because Obama promises it will get even better. He wouldn't rule out using "Slaughterhouse" rules for other bills that he wants passed. He can say that because it is clear that he controls Congress! Checks and balances are gone! So get ready for Cap and Trade, Card Check, and any other insane notion the Dems can come up with. If they get away with it for healthcare, everything else will come flooding in.
There is nothing in Obama's past that makes us think he knows what he is doing and we should trust him. In fact, the reverse is true: he was a junior senator whose constitutional qualification to serve is still in doubt because every time someone sues him for his birth records, he sends his lawyers out not to disclose the documents, but to fight disclosure. That's insane. Nobody does that.
From Rev Wright to self-proclaimed communist terrorist Bill Ayres (and his wife who was a convicted terrorist and spent time in prison) to a whole host of others, his background is one of a person who has an extremely unsettling past
So to the people who voted for Obama and now regret it, do your penance, admit that you made a mistake and get to Washington DC and join the other patriots! That's the least you can do for putting this insane idiot into the White House.
God Bless the American citizenry who stand against this monstrosity! Conservatives, Republicans, Democrats, and Independent. Representatives and Citizens alike. Are you with us? Write and Call you senators ....and don’t stop praying.

I prayed so hard last night I gave myself hotflashes and I am not kidding. We must all put our spiritual backs into it so to speak. We have done all that we can humanly. Now it is in our Creator's hands.
Posted by Me, Myself, And I at 7:50 AM 9 comments:

Obama's first response was to say nothing, just keep on body surfing and hitting the links. He knew the State Runs would twiddle their thumbs, look the other way, and tell us breathlessly what the First Wookie was wearing, and how they were (in a weirdly improbable image) all sitting around singing Christmas carols-- presumably in their bathing suits.

But the internet was buzzing, including this site, with news about the father reporting his son to US authorities, the kid buying a one-way ticket with cash, having no passport, etc etc etc.
His speeches are all starting to blur together....and I'm not listening! His presence before a teleprompter is not reassuring. The USA realized back in November 2008, we are on our own....this explains the huge leap in buying guns and ammunition. We will, if we are not already, become a nation of Beamers.....I say, let's roll.
Bottom line: Obama and the State Runs cannot control the news. Continuing to try now only makes them look increasingly foolish.
Posted by Me, Myself, And I at 7:32 AM 4 comments:

I for one am sick of Oreilly saying that "Obama is so smart...", "He should come on this program where i can ask him...." OR.. had a chance and softballed it. I believe he has a stealth plan to get a job with the Obama regime.
Must be getting bad when he has the same segment with Sossel that Beck had on weeks ago about the golfcarts.

As to the post subject.. now Obama plans on starting a rule by edict? Think Obie one.. the last one who tried those poses, symbols and edicts became a ornament on a telephone pole. Be verrrrrrrrrrrrrrrrrrry careful Obie.
Posted by Me, Myself, And I at 2:05 PM 1 comment:

Former Vice President Cheney will appear on ABC's "This Week" on Sunday, and it’s a safe bet what he will say: President Barack Obama projects weakness to terrorists and puts American lives at risk. It’s the kind of brutal charge — nuance-free and politically explosive — that has become a Cheney specialty since he left office 13 months ago. Cheney’s broadsides on Afghanistan policy, detention and surveillance policies, and Obama’s general philosophy about the U.S. role in a dangerous world inevitably dominate the news.
And the GOP fights back by agreeing to assume a supine position at is feet. Get up and yell! Now! Any Gop wimp that does not is open game next year and in 2012. That leaves Demint alone in my book. Who else is out there openly fighting this nonsense
Posted by Me, Myself, And I at 2:03 PM 1 comment:

Nancy Pelosi Says There Is No Alan Grayson Apology Needed

Nancy Pelosisays there's no reason for Rep. Alan Grayson to apologize for his "Die quickly" remark, since Republicans have made statements just as outrageous in the past.
Hum... Grayson has said more wacko things than this. Just how was this leftist loudmouth elected in the first place? Queen Pelosi will be a bitter partisan hack hypocrite until her political end which can't come too quickly for me.
The left NEVER give an inch, do they?
Go right ahead, asshats, hitch your wagon to that mental midget Grayson's star . I hope that you go down with him.
Posted by Me, Myself, And I at 5:52 AM 9 comments:

Let's not ever forget.

It is a matter of history that when the Supreme Commander of the Allied Forces, General Dwight Eisenhower found the victims of the death camps he ordered all possible photographs to be taken, and for the German people from surrounding villages to be ushered through the camps and even made to bury the dead.

He did this because he said in words to this effect:

This week, the UK debated whether to remove The Holocaust from its school curriculum because it 'offends' the Muslim population which claims it never occured. It is not removed as yet. However, this is a frightening portent of the fear that is gripping the world and how easily each country is giving into it.

It is now more than 60 years after the Second World War in Europe ended. This e-mail is being sent as a memorial chain, in memory of the, 6 million Jews, 20 million Russians, 10 million Christians, and 1,900 Catholic priests who were 'murdered, raped, burned, starved, beat, experimented on and humiliated' while the German people looked the other way!

Now, more than ever, with Iran , among others, claiming the Holocaust to be 'a myth,' it is imperative to make sure the world never forgets.

This message is intended to reach 400 million people! Be a link in the memorial chain and help distribute this around the world.

How many years will it be before the attack on the World Trade Centre...
'NEVER HAPPENED'

Don't Tell Me Tha Reagan And Bush Did It Also !

There were no lessons teaching the kids about how great the Pres is. You have not followed your lessons from Obama!!! Get to work and repeat after him "Work for me, serve me" "What can you do for me?" It use to be what can you do for your country. Obama is not the country. Dems have lost their way, they are following a whatever the guy says. Not thinking anymore for themselves.

Do not let Obama Indoctrinate your kids on September 8th

Keep them home from public schools that are pouring the Obama Kool-aid for children.

And don't you DARE to call me a racist! I don't like any color of any Marxists or Socialists.!
Posted by Me, Myself, And I at 5:41 AM No comments:

Don’t use profanity when you comment on my blog and I won’t on yours.

This blog believes in freedom of expression, no matter what. I have not, do not, and will not delete comments… period.

Me, Myself, And I
This is a blog about my thoughts and views. Please enjoy yourself here and take the time to write a comment. I call it "I Love Life" because I'm in love with living. Now about me: I am a stay-at-home mommy of three gorgeous kids, I am married to the hottest stud around. He is an awesome husband, great daddy, and the best Senior Engineer T-Mobile's got! Our 7 year old thinker and artist. She is also the best big sister. She just started first grade and is doing awesome! She is so smart! She also loves gymnastics and swimming. Our 4 1/2 year-old spunky monkey who is obsessed with drawing on,gluing, taping and cutting everything he can. He just started preschool and is loving it. He cracks us up daily with the hilarious things he says. And our one and a half year old silly baby. She loves to get into everything! Her favorite food is bananas and her favorite place is outside. She loves to cuddle with mommy, climb on daddy, and laugh at her big sister. There is a lot of love in our home and I can honestly say life is good. I guess that pretty well sums it up. 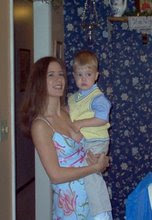 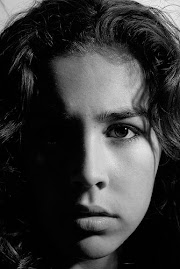